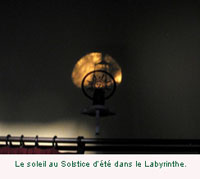 Although the Solstice is an ordinary event in the sense that it comes twice a year since the beginning of time, it is also an extraordinary moment, entirely independent of mankind and its powers. In point of fact, we are now just about able to calculate its precise date and time, which in the case of the next one is 21 June at 8.46 a.m. Most civilisations have noted this magic moment, with the result that most festivals focus on the end of June and end of December. I should like to give full credit to Maurice Fleuret, who – in 1982 when he was Head of the Music

Department at the French Ministry of Culture – had the idea of proposing to his chief a “Festival of Music” to coincide with the Summer Solstice. This enterprise of his has now had international repercussions.

The house in Italy where Daniélou wrote many of his works is built on a hill known as “the Labyrinth”, inhabited since very ancient times as shown by the pieces of Etruscan pottery found there dating from the sixth century BCE. It appears that the house was aligned – perhaps on the foundations of some religious structure – according to the Summer Solstice, whence the name Daniélou gave it: “Solstices at the Labyrinth” (Les Solstices au Labyrinthe), as also the title of his memoirs “The Way to the Labyrinth”.

Some very good and encouraging news has been received from a press-cutting agency (l’Argus de la Presse), to the effect that an article in Monde 2, (from the newspaper Le Monde) on 19 March 2005, states that “one of ‘the most popular’ philosophical sites according to Netscape is the one dedicated to Alain Daniélou”. Such recognition is greatly appreciated by all our team and will stimulate further development and promotion of the site.

We should like to devote this Summer Solstice Newsletter to music, which was immensely important to Alain Daniélou and you will find references to Stravinsky, Benjamin Britten, Virgil Thomson, Yehudi Menuhin, Ravi Shankar, Sylvano Bussotti and Igor Wakhévitch. With regard to Henry Sauguet, see Newsletter n° 6, which you can find on our site: www.alaindanielou.org.

A Civilization of Differences : the Ancient Tradition of Universal Tolerance.

Collections of unpublished documents, articles and conference papers, given by Alain Daniélou from New York to Moscow, and from Teheran to Benares. They tackle subjects as different as music, Hinduism, Yoga, the castes, tolerance and fanaticism, eroticism, Tantrism, the modern world, the cosmic cycles, the search for wisdom and happiness. Like the Darshanas, these contradictory points of view which, according to the Hindus, are alone in giving unblinkered access to the reality of the world, the bringing together of these at once scholarly and incisive texts casts a new light on the thought of this great Indian scholar.

– Under preparation in English:
Shivaism and Primordial Tradition

Off the Cuff – L’OUBLI DE L’INDE

According to Netscape, one of “the most popular” philosophical sites is the one dedicated to Alain Daniélou, a great authority on Indian philosophy and eroticism, still largely unappreciated in Europe, as shown by Roger-Pol Droit in his L’Oubli de l’Inde, an enthralling book that has just been republished. This site provides an abundant classical discography of northern Indian music, on which Daniélou was an expert (he also played the vina). We also find essays on Shivaism, polytheism, the Kama Sutra, by this person who was a friend of Cocteau, Stravinsky, Nabokov. Daniélou fought against Gandhi, to get his disciples to stop breaking homosexual statues in Hindu temples. 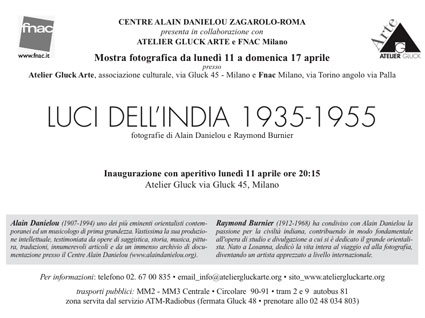 Rabindranath Tagore often used to say that his songs would live in Bengal long after his name and his writing were forgotten. Although it is difficult to believe that the literary achievements of this great Bengali poet might one day be forgotten, today we see that his literary works are already considered as classics
that is, belonging to the past _, while his songs, sung by everyone in every part of Bengal, belong to the eternal present. During the nineteenth century, Indian classical music in Bengal developed in many ways an over-refined technique, performed only by highly trained specialists and fully appreciated only by a select audience. The musical form from created by Tagore maintains the essential features of the classical Indian system of music, but brings its rare power of expression within reach of all. Tagore was always deeply moved by the human predicament. His songs, with their simple but vigorous melodies, have given voice, expression, to the feelings of millions of men and women. These songs can be heard everywhere, in wealthy city home, in lonely rice fields, on the rivers or in the fishermen’s huts, in the village street or the university hall. Their ringing words know no difference of creed, race, caste or age. Within a few years, Tagore’s music conquered the whole of Bengal and still pervades the rhythms of everyday life with evercherished melodies. Today, Hindu India and Muslim Bangladesh have both chosen songs by Tagore as their national anthems.

And Music at the close : Stravinsky’s Last Years, A personal Memoir by Lillian Libman

“ … The overflow – a variety of types, including several fashion models in seethrough shirts and slacks accompanied by good-looking bronzed escorts, a few principesse more formally dressed (they wore gloves), and a group of businessmen with briefcases (uneasy purveyors, perhaps of the accoutrements of the proceedings) – moved belligerently to the family section and remained there.

Meanwhile, another pungent book has come from France, this one directly – Semantique Musicale by Alain Daniélou (Paris, Hermann, 1967). Subtitled Essai de Psychophysiologie Auditive, it examines the musical experience through communication theory, the physical structure of the ear, and the known, or supposed, facts about auditory memory. In 118 pages, including diagrams, it opens a major matter and offers believable information about it.

page 531 in John Rockwell : A conversation with Virgil Thomson

VT : The sophistication of the Rolling Stones or the Beatles – the Beatles are old English melody style; it’s not tonal, it’s modal – is very slight compared to what Ornette Coleman does, which is multirhythmic, polytonal, in an elaboration of musical device that the classical world can hardly match. Alain Daniélou thinks that the wildness with which the adolescent world takes on the pop stuff – has for the last ten or more years – is simply a reinstatement of the old Greek corybantic troupes.
JR : I think he’s right

Having covered the entire length and breadth of our great heritage during his long span, so deep were his feelings for the Motherland that he embraced Hinduism and took the name of Shiv Sharan. Thus began the incessant flow of his glorious writings on Indian culture especially covering music, philosophy and religion. To this day his continuous contribution to the promotion of India’s culture heritage abroad through his works has no parallel in modern history. His unflinching devotion to our culture and, above all, love for Mother India, defy all expression.

It would not be an exaggeration to call him the modern Max Müller.
Such “sons” of our country, in spite of their alien birth, belong to this country with all their heart and soul.

Daniélou’s brilliant mind and warm heart have always tried to make us undestandable to each other. Seeking out the elusive and often hidden cultural links which bind us and our divergent cultures into one humanity, it is he perhaps more than anyone else who, with his gift of rapturous belief and eager communication, has provided many of the insights which bring us together.
No small measure due to Alain Daniélou lifetime of dedication to sounds and to the people who make them. 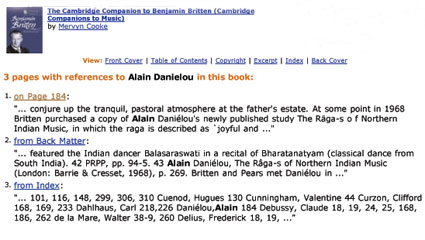 Painting, drawing, photos, singing, the vina, musicological and Indian studies, mythology, religion, history, society : Alain Daniélou took an interest in so many fields that it is difficult to approach them all, and even more so to unite them. Here’s precisely what Xavier Bellenger has managed to do on this CD Rom, presenting the multi-faceted work of this unclassifiable artist-philosopher and lover of beauty, with his untiring search into the mystery of creation.

Developed on the initiative of Alain Daniélou and at his request, and tuned according to his theory, the Semantic is an electronic musical instrument designed by Michel Geiss, Christian Braut and Philippe Monsire. It is the successor of a previous version, the S52, created by Claude Cellier and André Kudelski. The S52 was devised to check the theory, but as an instrument was difficult to play, due to ergonomics.

The Semantic has been designed as a complete musical instrument. To make it easier to play, Alain Daniélou decided to utilize only 36 of the 53 notes of the scale (cf. Annex 2), considering the other notes less essential.

The Semantic is a “ready-to-play” instrument, fully self-contained, and user-friendly for composers and musicians. The instrument comprises a Kurzweil K2000 R sound generator and two Midy 20 Cavagnolo button keyboards. A powered amplifier is incorporated to avoid any need for external amplification. The Semantic will offer a choice of twenty or so different tones (the spectrums of which will be designed to highlight Alain Daniélou’s theory). To enhance the performance, the keyboard is velocity-sensitive (speed with which the keys are pressed), as well as aftertouch-sensitive (pressure variations while the keys are being pressed). Furthermore, sustain and expression pedals and faders are provided to produce an effect on volume attack and release parameters, on spectrum, etc.

Among other reasons, the K2000 R was chosen because each note can be tuned to one-cent accuracy. In other words, at the worst, the pitch of a note programmed on this instrument could only deviate by half a cent from its theoretical value – a very low margin of error allowed by Alain Daniélou. By way of example, raising notes C1 (65.406 Hz) and C6 (2093.005 Hz) by one cent corresponds to increasing their frequency by 0.0378 Hz and 1.209 Hz respectively.

As compared to the usual piano keyboard, the button keyboard has two distinct advantages. Firstly, its aspect is sufficiently different from the former which, to the musician’s mind, is synonymous with the tempered scale. It was thought that with a new instrument like the Semantic, it would be better to break away from accepted ideas. Furthermore, with respect to the average finger span, a greater number of notes can be reached than on a piano keyboard, which is essential considering that it has three times more notes than the piano keyboard.

Though, the Semantic comprises two keyboards with 105 keys each, corresponding to a range of almost 6 octaves. At the same time, it is possible to transpose by semitones or octaves. The space required for the 105 keys is a mere 18 by 4 inches. For comparison, one octave on the Daniélou scale takes up 5.2 inches, whereas on a piano keyboard the same number of notes would need 14.4 inches, or nearly three times as much. 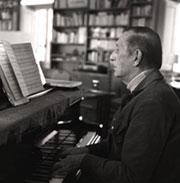