In this editorial, I wish to pay tribute to two great personalities who have died since our last newsletter. Necessarily, His Majesty Mohammed Zaher Shah, King of the Afghans, and the choreographer Maurice Béjart had few points in common, except that they were both Muslims, both friends of Alain Daniélou, and both visitors at the Labyrinth at Zagarolo
The King spent several years with Alain Daniélou’s family at the time when his father, the ambassador in Paris, was recalled to Afghanistan to succeed to the throne after the assassination of his predecessor. It was at this time that he was led by Alain Daniélou, his elder, into sporting enterprises, including an adventure in a canoe. The King decided to settle in Rome when he was exiled, and thus was able to renew the ties of this youthful friendship. He would come quite frequently to lunch, accompanied by his son, Prince Mir Wais, or a kinsman, at the country house that has now become the Alain Daniélou Study Centre. On each of these private visits, I was struck by his extreme courtesy, by this sovereign’s extreme simplicity, his devotion to his people and his impartial analysis of his country’s geopolitical situation. The indifference of western governments to this king was dumbfounding, considering that he had managed to keep his multi-ethnic country intact and at peace for forty years. Despite the tragic hazards life had in store for him, he was always good-humoured and very kind, and was amused by the flag of independent Brittany that fluttered over the house: shouldn’t it have been replaced by the Afghan royal flag while he was staying at there?

Maurice Béjart very early on used the Indian music recorded by Alain Daniélou for his ballets, and particularly for Bhakti. During the ’eighties, his relations with Daniélou became closer through their mutual friend Savitry Naïr. So it was that after his hip operation, he came to spend a few days’ convalescence at Zagarolo accompanied by Eiji Mihara. I recall their last meeting, when Maurice Béjart came to see Daniélou at the Clinique de la Source at Lausanne where Daniélou had been hospitalised. Eiji, Eric Vu An, Béjart and I stood round the bed. Béjart gazed at the sick man, who was to leave us a few days later, with extraordinary intensity, as though he wanted to merge with him and discover the mystery of passing to the other world, which I believe was one of the basic questions that interested him.

I also remember a conversation in Venice (Confluenze culturali di musica e coreografia, La Fenice, 9 March 1989), when they were able to compare their very diverse points of view, Daniélou being profoundly attached to orthodoxy, while Béjart on the contrary was interested in universalism.

On a personal level, I must emphasise what a considerable contribution the possibility of frequenting such eminent characters had on my own training, since in their kindness they were always ready to take an interest in my activities and give me advice. Thus it came about that, throughout the ’eighties, I was able to photograph all Béjart’s performances, from “Le Martyre de Saint Sébastien” and “Malraux” to “Kabuki” and “1789 et nous”.

The events celebrating the centenary of Alain Daniélou’s birth come to an conclusion at this winter solstice 2007 with a private concert at Palazzo Borghese (Sala Paolo Borghese) at Artena, a small village near Zagarolo. Francesca Cassio accompanied on the piano by Ugo Bonessi and on the tabla by Fabio Lazzarin will interpret the song-poems of Rabindranath Tagore in Alain Daniélou’s transcriptions for western voice and piano. The poems will be presented and read by Giulia Gatti and Mario Prayer who have translated them from Bengali into Italian.
In their extent, their success and the collaboration we have enjoyed, these commemorative events have exceeded all our expectations. Events in seven countries, in fourteen cities and towns, thirteen publications, nearly fifty organisations, sponsors and aides, demonstrate the interest that this author still manages to raise thirteen years after his death.
My best thanks to all these organisations for their assistance and support, as well as those who have helped us throughout the year, in particular the artists, musicians, singers and dancers who have performed at these events and two of our collaborators, Riccardo Biadene and Sylvain Dumont, who have shown such availability and remarkable efficiency, without which the success of the events themselves would not have been possible.

As a faithful pagan, out of respect for a date that owes nothing to mankind, I wish you all the very best for this winter solstice 2007, and the rebirth of light. 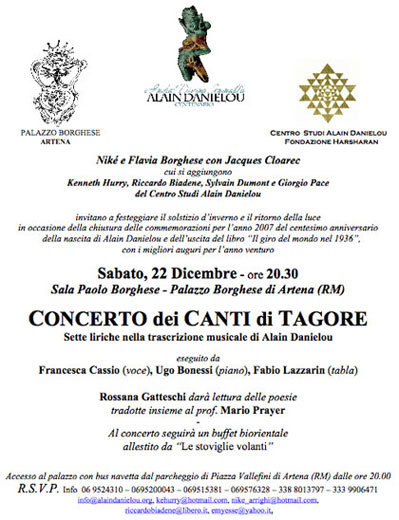 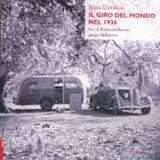 October 2007 : Publication of the Italian edition of the Tour du Monde en 1936 by the publishing house Casadeilibri, Padua. This edition embellished with 103 of the drawings made by Alain Daniélou during his trip and hitherto unpublished photographs dating from the same period by Raymond Burnier

October 16th in Valladolid and November 15th, Barcelona (Spain): Presentation from Kairos Publisher of the Spanish edition of “The Way to the Labyrinth” at Casa Asia. 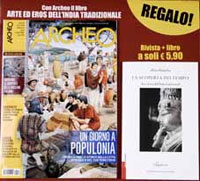 CasadeiLibri publication of Daniélou’s and Burnier’s photos of the temples of Khajuraho, Konarak and Bhuvaneshvar, as a supplement to the review Archeo.

For Alain Daniélou, the West has lost its own tradition and estranged man from nature and the divine. He shows us that the rites and beliefs of the ancient western world are not dissimilar to those of Shaivism and can be easily explained by means of texts and rites preserved in India. The relatively recent religions of the Aryan and Semitic worlds, Judaism, Christianity, Islam and Communism, have estranged man from the rest of creation and from that multi-millenary religious and mystic experience whose tradition had been preserved in India down to our own times, which the West – if it wants to survive – must rediscover.

In “Revue Sud n° 9″, European periodical on culture, art and literature (Editions Lavieri, Naples), article page 13, by Daniélou (translation by Marina Mazzacurati) with the title “l’Improvisazione”. With the collaboration of the composer Luigi Esposito.

AMELIA CUNI is a singer, composer and performer. She has trained her voice and musical skills in India, according to the tradition of DHRUPAD singing and KATHAK dance. Her present work includes contemporary music and multimedia collaborations with several artists of international repute. She is engaged in the transmission of the knowledge she has acquired from her gurus and teaches Indian singing at the Vicenza Conservatory in Italy. She is based in Berlin.

Anusha Subramaniam is one of the best known faces of Bharatanatyam dance in the UK. An alumni of Kalakshetra, she is part of the long tradition that has revitalised, restructured and re-interpreted Bharatanatyam in a contemporary context. As a solo dancer Anusha has performed at many prestigious venues for a variety of appreciative audiences internationally. She regularly collaborates with other classical and contemporary performing artists exploring and expanding the vocabulary of dance and music. Most recently she collaborated with Dance Alloy (USA) and Arangham (India). Director of Beeja, she is also a teacher, choreographer and dance movement therapist.

This show was also performed as a tribute to Alain Daniélou in the walled garden of Palazzo Rospigliosi at Zagarolo (near Rome), with the collaboration of the municipality of Zagarolo and its Mayor, signor Daniele Leodori. 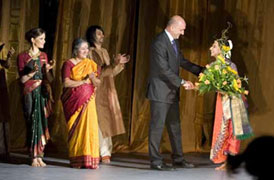 As an artist, Shantala Shivalingappa specialises in the Kuchipudi dance, a kind of classical dance from southern India that takes its name from a tiny village in Andhra Pradesh, where it was born. Like other forms of classical Indian dance, it is based on the Natya Shastra, the strict two-thousand-year-old treatise codifying in detail the rules for dance, music and theatre. Kuchipudi, however, was also influenced by popular dance and the musical traditions prevailing at that time and in that region, which developed themes of religious devotion. As a result, its style is not only highly sophisticated and structured, but also vibrant and vivacious, extremely complex and very charming.

Shantala Shivalingappa, famous performer in the Kuchipudi style, also known in Europe for her work with Peter Brook, Maurice Bejart, Bartabas and Pina Bausch, will be accompanied by four Indian musicians (flute, vocal, sitar, mridangam) and will perform the margam (dance programme) SHIVA GANGA as tribute to Danielou.

– Zagarolo (Rome) Italy, at the Palazzo Rospigliosi, in Rome at the Palladium theater, in Bergame at the « Ridotto del Teatro comunale »: Concert of song-poems by Rabindranath Tagore adapted by A. Daniélou: F. Cassio (soprano), U. Bonessi (piano), Ileana Citaristi and Saswat Joshi (dances and choreographies). Recitation of the poems in Italian by Claudio Di Palma. Directed by Nadia Baldi, and Francesca cassio for vocal in Bergam.
Translation in italian of the poems by Mario Prayer and Giulia Gatti.

– September 15, Radio Suisse Romande, a two-hour broadcast entitled “La mémoire et les dieux” from 1.30 p.m. to 3.30 pm on Espace 2. The programme can also be listened to during the following month on Internet.

– September 30 from 4p.m. to 5 p.m. on Espace 2, Daniélou and India A tribute to Alain Daniélou and to his approach to Indian music.
Produced by Alain Perrottet on the occasion of the centenary of Alain Daniélou’s birth, excerpts from archive recordings in which Alain Daniélou talks about the art of the rāga and his personal approach to Indian music, illustrated by musical excerpts from Indian concerts recorded by Espace 2.
The programme can also be heard on the Internet link:

– On line on the Internet: Long interview by Jacques Cloarec “Alain Daniélou, l’itinéraire inclassable d’un Hindou” on the site

– Recording of these two concerts by the Jacques Dudon ensemble, broadcast by the third channel of Rai, RAI 3.

– Press conference on India: Divina Sensualità – a musical homage to Alain Danielou
On Monday, October 1 at 12.30 a press conference will be held at Ca’ Farsetti, Venice, to present the music series India: Divina Sensualità, a series of concerts in homage to Alain Danielou that will take place in Venice in the month of October. The series of events are promoted by Comune di Venezia, Centro Studi Alain Danielou, Fondazione Harsharan and Fondazione Giorgio Cini.
Speakers will include: Luana Zanella, Massimo Cacciari, Giovanni Giuriati, Jacques Cloarec and Anita Dolfus.

Music series India: Divina Sensualità
Round Table on Alain Danielou
Concert – Darbari Sangeet – Music from Indian Courts
As part of the series India: Divina Sensualità, in homage to Alain Danielou in the year of his 100th anniversary, the Intercultural Institute of Comparative Music Studies of the Giorgio Cini Foundation organised a Round Table dedicated to its founder. Participants will include: Jacques Cloarec, Ivan Vandor e Maria Grazia Marchianò. In addition to that, a concert by scholars who have studied Indian music at the Giorgio Cini Foundation will take place at 20.30. This event is aimed at stressing the importance of Indian worskhops and classes that have been organised by the Institute throughout the years, following the mission that Danielou always pursued: spreading great music traditions from the East in the Western world, with a special attention to Indian music. The programme features various styles and repertoires representing the artistic experience of each performer and at the same time some classical music from Northern India. Performers will include: Francesca Cassio (vocals), Federico Sanesi (tabla), Fabio Lazzarin (tabla), Edward Powell (sitar).

– October 16th, Valladolid (Spain), as part of the India-Spain Forum, at 5 p.m., presentation of the Spanish edition of “The Way to the Labyrinth” at Casa de la India, accompanied by an exhibition of Alain Daniélou’s photographs (1935-1955) “Music and Dances of Traditional India” from October 17th – November 16th.