The Internet convulses the way in which we organise and spread knowledge. The greatest library of all times is being created beneath our eyes, and is enriched every day with an astronomic quantity of new information. This library can be accessed and “read”… as well as “written” – to utilise I.T. terminology – by anyone. In this way, we can all take part in its construction, from the lowliest of Wikipedia contributors – x million definitions – to governments, institutions and libraries engaged in the enormous work of digitising our heritage, and even including the highly controversial publishers of Wikileaks. There’s no doubt that Alain Daniélou would have been enthusiastic about such an adventure… and would have taken part in it!

It has consequently been a natural choice for the Alain Daniélou Study Centre. Works, interviews, articles, correspondence, records, music scores, paintings, water-colours, photos: we have started indexing, numbering, classifying and publishing on the Internet the abundant and many-facetted work of Alain Daniélou.

After the many commemorations of the one hundredth anniversary of his birth, with the impressive collaboration of more than 40 organisations of all sorts from numerous countries – see our site for our newsletter n° 15, 2007, the Centre paused for breath and limited its activities. With renewed energy, it is now undertaking a new and far-reaching project… or rather, two projects, since we have decided – again with the aim of ensuring that Alain Daniélou’s works with always be available – to publish them in the form of e-books. Agreements have been signed for this purpose, on the one hand with his American publisher,

Inner Traditions International, and on the other, with the French publishing house Fayard. On our own side, we shall shortly be making available on the Internet Daniélou’s work “Le symbole du Phallus”. Available in English, German and Japanese, with the French edition out of print, its great interest lies in showing the universality of the cult in time and space, and the rigid prudishness of monotheists with regard to this symbol.

This is all fine, at a time when Alain Daniélou’s work is meeting with increasing success. Works on him are now appearing and translations being made one after the other: his book “While the Gods Play – Shaiva Oracles and Predictions on the Cycles of History and the Destiny of Mankind” will soon be published, by way of example, in Spanish and in Italian

Lastly, we should not forget to point out the tribute by Christopher Gérard, published in the “Nouvelle Revue d’Histoire” — N° 51, November/December 2010 — excerpts of which are given in this newsletter.

“Faced with the degradation of religious thought that has become purely dogmatic, puritan and social, not only in the West, but also in modern India itself, it seems that the rediscovery of a symbolic mythology, of a cosmology that does not separate religion, metaphysics and science, with greater respect for the freedom to live and think – which is actually respect for man’s creator – could be the source of that new era that will succeed the disasters that threaten mankind. Here, I have only been able to give some very succinct insights into the immense theological and mythological literature of India. I have merely sought to gather together a few essential facts to provide a better understanding of the Hindu concept of the multiplicity of the Divine and the dangers inherent in the monotheistic illusion.”
Alain Daniélou

The Myths and Gods of India, The Classic Work on Hindu Polytheism from the Princeton Bollingen Series, Inner Traditions International, 1991, Foreword of the French edition.

Exergue:
The one without color appears
By the manifold application of his power
With many colors in his hidden purpose.
May the Being of Splendor in whonm the world dissolves And from whom it rises
Grant us a clear understanding.
(Shvetâshvatara Upanisshad, 4, 1-4)

We’re very pleased to officially announce that we’ve launched a new version of our website with blogs, staff picks, and other new features: http://www.innertraditions.com/

In particular, I’d like to draw your attention to the new illustrated history of Inner Traditions – – full of interesting tidbits and great pictures from our past: http://www.innertraditions.com/about- us
We’re also very proud of our reforestation project in Costa Rica. You can find out more about the Hacienda Rio Cote Project here: http://www.innertraditions.com/community/hacienda-rio-cote

If you’re a Twitter user, please follow us @InnerTraditions. We regularly tweet about good reviews, interesting articles, author events, and many other things that relate to the Inner Traditions * Bear & Company community. If you include our user name @InnerTraditions in your tweets about your event or book news, it will ensure that we see it and retweet it! http://www.twitter.com/InnerTraditions

A unique collection of unpublished photos from the Raymond Burnier and Alain Daniélou collection has been digitized to restore the unique experience of Santiniketan.

While the gods play: 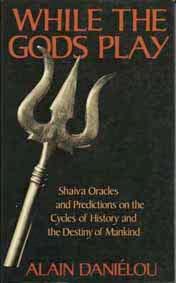 According to the early writings of the Shaiva tradition – still alive in India and dating back at least 6,000 years – the arbitrary ideologies and moralistic religions of modern society signal the last days of humanity heading toward destruction.

This predilection is only a fragment of the vast knowledge of Shaivism, the religion of the ancient Dravidians. An initiate of the Shaiva wisdom, author Alain Daniélou has assimilated and revived
essential concepts of the Shaiva philosophy and its predilections. Clearly expressed in the ancient teaching, these concepts are in accord with, yet surpass, the boldest scientific speculations about consciousness, time, the nature of life and matter, and the history and destiny of the human race. Inherent in this body of knowledge is an understanding of the cycles of creation and destruction which, in conjunction with astronomical phases, determine the life span of the species. Since 1939, humankind has been in the twilight of the Kali Yuga age, or at the end of a cycle. The impending cataclysm, Daniélou explains, is brought on by our own errors, and its date will be determined by our present and future actions. While the Gods Play examines how the visionaries of ancient times defined our role in creation. It explains why and how we have abandoned this role, and reflects on what action can be taken to consciously and creatively influence our own destiny. Included are chapters on The Religion of Nature and The Religion of the City, The Transmigrant Body, Sexual Rites, the Castes, Sacrifice, Magical Powers, monastic Orders, and Forestalling the Final Day. One of the most distinguished living orientalists and a friend of Stravinsky, Jean Cocteau and Nabokov, Daniélou spent more than 20 years in India studying music and philosophy. He wrote the acclaimed Gods of India and Shiva and Dionysus and produced a series of ethnic music recording for UNESCO. Formely director of the International Institute for Comparative Music Studies in Berlin and Venice, he is a Chevalier de la Légion d’Honneur, Chevalier des Arts et des Lettres, and Officier du Mérite National.

Manufactured and distributed by Questz World, the Music Company of the Rozaleenda Group, Inc (Kolkata, questz@questz.com) 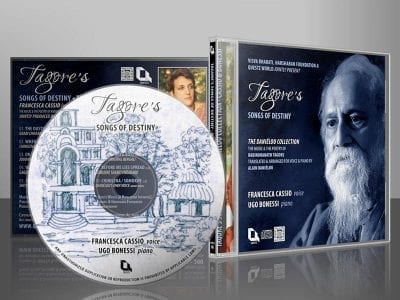 Dhaka -23/12/2010 at The Italian Ambassy with a presentation by Prof. Anisuzzaman of Dhaka University.

Tagore’s Songs of Love and Destiny

“Songs and Poetries of Rabindranath Tagore in the Transcription of Prof. Alain Danielou for Voice and Piano”

As Professor Alain Danielou writes in his biography, Tagore requested him to transcribe some songs from the Rabindra Sangeet according to the western vogue of the time, for voice and piano. It was infact The Poet’s wish that some of his songs could be sung also in the West. It was an innovative concept that Tagore himself wanted to promote, and that up nowdays nobody has yet performed in this form. Alain Danielou worked over 50 years on this project. He translated into english and transcribed for piano only 18 songs, in a way that the original melodies -with their embellishments and peculiar raga movements- could be recognized, but with a piano harmonic accompaniment that could support and emphasize the meaning of the poetries. The work of Danielou shines mostly in the elegant piano arrangement, and in the beautiful translation into english (and french) that match with the melodies as well as with the meaning. The blending of the musical Indian language with the western notation, and harmony, requires skills in both discipline, and for this reason for long time these song have never been performed. Due a professional training in both Classical Western and Hindusthani vocal music, in 2007 Dr. Francesca Casio and Maestro Ugo Bonessi have been in charge on the behalf of the Danielou Foundation to perform and record -for the first time- the cycle of the 18 songs of Tagore transcribed by Alain Danielou.