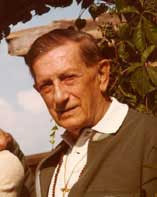 The numerous subscriptions to numbers 1 and 2 of this newsletter have encouraged us to publish it on a sixmonthly basis.
2004 marks the tenth anniversary of the death of Alain Daniélou, who died at Lonay, in Switzerland, on 27 January 1994. Several events have been planned in his memory in various countries (India, Spain, Italy, Germany). This newsletter indicates the ones currently at an advanced stage of planning, particularly in Spain, where the highly dynamic and new Casa Asia of Barcelona envisages various events concerning Tagore and Daniélou during the summer of 2004.
We are, of course, ready to listen to anything you have to say. Please don’t hesitate to let us have your comments and suggestions, which should be addressed from now on only to info@alaindanielou.org.
The Winter Solstice is the right time for taking stock: the administrator of our site www.alaindaniélou.org tells us that in the space of one year it has been visited by over 20,000 people, an excellent performance for such a site, showing the mounting interest in Alain Daniélou’s work.

– Lumière de l’Inde
Photographies d’Alain Daniélou et Raymond Burnier, 1935-1955. Will begin on 19 January at the Alliance Française at Madras with a commented projection of the CD Rom “Alain Daniélou, le Labyrinthe d’une vie “. The same event is scheduled to take place at other Alliances Françaises centres in India.

– Concert by Vidhya Shankara (Vina) on 23 January at Madras for the launching of a book by Alain Daniélou in Tamil.

– Celebration at the Cini Foundation in Venice on 25 October 2004 to present the computerisation of the 300,000 cards of the Daniélou archives commented by two scientific specialists on Indian music (English and Dutch). Exhibition of dances by the Raghunath Manet Troupe.

– A Brief History of India
Inner Traditions International, Rochester, 2003 / The first English translation of the second edition of the work awarded the French Academy Prize in 1972. Translation by Kenneth F. Hurry.
Alain Daniélou approaches the history of India from a new perspective–as a sympathetic outsider, yet one who understands the deepest workings of the culture. Because the history of India covers such a long span of time, rather than try to create an exhaustive chronology of dates and events, Daniélou instead focuses on enduring institutions that remain constant despite the ephemeral historical events that occur. His selections, synthesis, and narration create a thoroughly engaging and readable journey through time, with a level of detail and comprehensiveness that is truly a marvel.
“Our debt to Daniélou’s scholarship and humanity is immeasurable.”. “The Times

Alain Daniélou, writer, musicologist and Indian specialist, died on Thursday, 27 January 1994 at Lonay, in Switzerland. He was eighty-six years old.

The announcement of Alain Daniélou’s death must certainly have surprised anyone who had seen him during the past few years. Having passed considerably beyond the eighty mark – he was born on 4 October 1907 at Neuilly-sur-Seine (Hauts-de- Seine) -, he used to confide with insolent insouciance “When I hear people talk about octogenarians, I say to myself ‘Oh my God! What frightful old men!’” It is true that on seeing his adolescent figure move, one couldn’t help being amazed at how little ascendancy age had over him. He seemed to ignore the laws of our common destiny, just as he had always ignored social restrictions, ideological straitjackets or religious phantasmagoria. “Time is merely an illusion, an apparent succession of moments during the course of a journey that all beings make in an eternal present”, he has written in the first pages of his autobiography.

Indeed, Alain Daniélou’s life, so full of scholarly research and learned compositions, could well be described as an unceasing pleasure-trip, with space joyfully set aside for pleasures and adventures. In this, he was a disturbing character, defined by no function, summarised by no job, classified by no assessment. At the same time, Daniélou was truly unclassifiable. Despite his vast work as an Indianist, musicologist, translator and writer, he was without ambition, attached to nothing, soliciting neither recognition nor sinecure. With an anti-clerical father, one of Aristide Briand’s ministers, a mother who founded a religious order and an elder brother who ended up as a cardinal, Alain Daniélou managed to escape any kind of determinism at an early age. He was not fond of his family background, preferring dancing, painting, music. In the Paris of the ‘thirties, he made friends with Cocteau, Diaghilev, Max Jacob, Maurice Sachs, and then departed on a world tour – North Africa, the Near East, China, Japan, and the United States. His attractive gaze rested everywhere, as if there were nothing to hold him. It was India that held two decisive encounters for him: one with a man, Rabindranath Tagore, and the other with a town, Benares. Daniélou remained from 1937 to 1958 in this country, which was to awaken him to himself. In the traditional schools, he studied Sanskrit, philosophy, music, he adopted the Hindu religion, was regularly initiated and even took part in the independence movement as a counsellor for the traditionalist party. The books that would result from this total immersion in Hindu culture and spirituality have now become irreplaceable texts for all who desire to experience India. On his return to Europe in 1958, Alain Daniélou set himself the task of discovering the musical traditions of the countries of the East, organising concerts, publishing record collections under the UNESCO banner, and setting up – in Berlin and Venice – two institutes for comparative music studies. This action, which he pursued under what were sometimes difficult conditions, had considerable influence. Not only did it make it possible for the West to rediscover Asian art music, but, on the rebound, it also assured that all these musical traditions would be respected and preserved in their own countries. To those who reproach him for his lack of interest in the world’s vicissitudes and his resolute choice in favour of a social organisation rather closer to Vedic times than to our own, Alain Daniélou would affirm that it was “in order to safeguard an art of living: the sacred”. And he would add, with an easy grace, allying knowledge and serene provocation , “I am reproached for having a considerable degree of obliviousness or, if people are kind, a kind of innocence. Indeed, I have gone through revolutions and wars without worrying much. I was busy with other tasks: understanding the Hindu rites, receiving initiations, saving and spreading traditional music, as often as not ignored and despised in its own native land.” “So, with all these formerly colonised peoples currently undergoing an unprecedented cultural and technological colonisation, it may perhaps not have been entirely vain to assist in the rebirth of their artistic and philosophical expression. To be frank, however, I have followed this role without any design. I have followed my instinct, my fancy, my pleasure.” 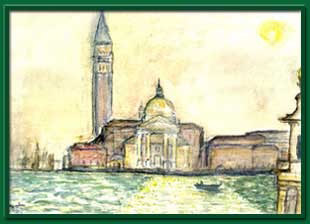 Another of my friends was called Alain Daniélou. It was in Berlin that I met him for the first time, in the ‘sixties, I believe, during a tour with the Ballets du Xxe siècle. One evening after the performance, we were invited to Nabokov’s place (the other one, the musician, not the father of Lolita). Alain Daniélou: a piercing eye, the smile of an old Mephisto, intelligence squared. We spoke about music, of course, Indian music. He astonished me. He knows everything, but not in a bookish way. I learned that he had started with dancing. Music came afterwards (but it was there before: Ah! the pianos of our childhood!).
He plays the vina, he reads Sanskrit (and translates it marvellously) and above all, he has lived for many years the daily life of Benares, to the extent of becoming just like that town’s other inhabitants. (For myself, as an ordinary tourist, I had only a few days to discover Shiva’s city.)

I saw Daniélou again in Venice, where he directs the centre at the Cini Foundation. I saw him again in Paris, at his apartment near Parc Montsouris, and more especially at Zagarolo, his real home, among the hills of Frascati, where the Indian sage at times changes completely, becoming a Roman faun, or a philosopher of the School of Alexandria. I spent ten or twelve days at Zagarolo, just after my first hip operation. I can well remember that I was still using a crutch. Daniélou has a vineyard there. He had his own wine.
He had a Brahmanic side. He loathed Gandhi (not by chance Gandhi was assassinated by a Brahman). He didn’t like Gandhi’s protestant, puritan, Anglo-Saxon side. He also condemned Muslim Puritanism.
I have learned a lot from his books, Le Polythéisme Hindou, L’Érotisme divinisé, Les Quatre Sens de la vie. One of the themes underlying these works is reincarnation. I have often talked about it with Alain Daniélou, who would start to smile. He had an artless, pure smile, like a child’s, but at the same time it was Mephistophelian. I would even say mephistophallic! I think he was pleased with my pun. He used to wear a small gold phallus around his neck, a copy of a Roman talisman, or an original, and at the end of his life he published a highly documented work on the phallus cult in various civilisations. I can still see Alain Daniélou: he had the mouth of Erasmus, painted in profile by Holbein, with that air of saying, “Careful! You won’t catch me out. I’m a lot wiser than I appear to be!”
His head was like Mephistopheles. I love Mephisto, it’s my favourite role, the one I performed as a child, with costumes that had been lent, saying to my little sister “You, you will be Faust!” In my memory, Daniélou is joy, lightness, humour, which were dear to Nietzsche. A dancer, I see him as Zarathustra: “Lift up your hearts, my brothers, and don’t forget your legs. Lift your legs as well!” Spending a day with him meant learning about youth. He died at Lausanne in 1994.

Painting, drawing, photos, singing, the vina, musicological and Indian studies, mythology, religion, history, society : Alain Daniélou took an interest in so many fields that it difficult to appreach them all, and even more so to unite them/ Here’s precisely what Xavier Bellenger has managed to do on this CD Rom, presenting the multi-faceted work of this unclassifiable artist-philosopher and lover of beauty, with his untiring search into the mystery of creation.