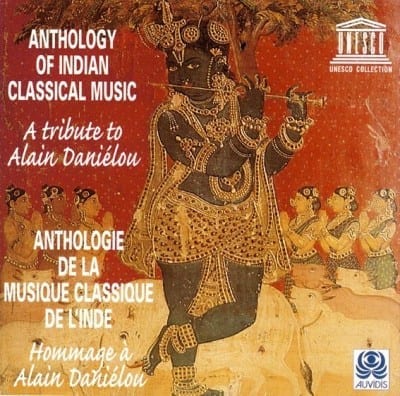 A tribute to Alain daniélou.
Unesco Collection of Traditional Music of the World.
3 compacts discs, This collection received the “Diapason d’Or” award and, in March 1998, the “Grand Prix du Disque”. (CD)

For the past ten years, Unesco and Auvidis have been cooperating on the publication of compact discs in the Uneso Collection of traditional music. To celebrate this anniversary, we have decided to pay tribute to the founder of this collection, Alain Daniélou, who was personally responsible for it between 1961 and 1981. This is a re-issue of the first recordings made in India by Daniélou himself under the patronage of Unesco and International Music Council.

Today, “music from far afield” has become a reference for many specialists and connoisseurs. These treasures have inspired many contemporary composers. We owe all this to Alain Daniélou. Today the existence all over the world, and especially in the Orient, of music, which is as classical as Bach and Mozart, is universally acknowledged: we owe that fact too to Alain Daniélou’s farsightedness and unstinting efforts.

More and more new tittles have been published in recent years. Shortly before he died in January 1994, Alain Daniélou expressed a wish. In reponse to that wish, over 50 new recording projects are in progress at present.
Noriko Aikawa
Chief of the Intangible Heritage Section Unesco.

The anthology of classical music of India is “historical” in the sense that it was the first anthology (1962) of this music to become available in the West in which the recorder pieces were not presented as “folklore” but as “serious” music. It includes the first recordings made in Europe of two young musicians who have since become the finest ambassadors of North Indian music; Ravi Shankar and Ali Akbar Khan.

In homage to Alain Daniélou (1907-1994), who was originator of these recordings and a tireless defender of Eastern music, Unesco decided to reissue this anthology in its original form, without changing the order of the pieces or the accompanying texts and commentaries.

Two short texts round off this edition: one by Jacques Brunet, who was Alain Daniélou’s assistant in his Berlin Institute, and the other written by Alain Daniélou himself a few days before his death.