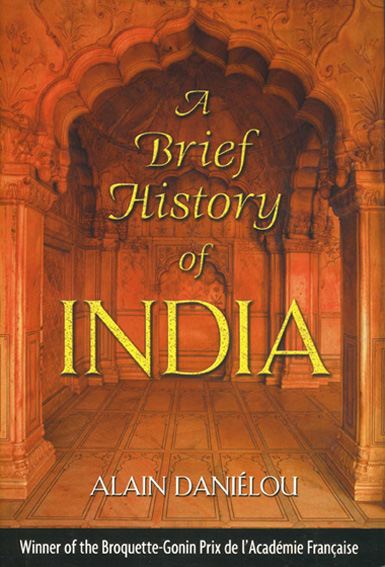 A brief history need not be superficial, as this work shows. In seven parts, Daniélou (author of over 30 books about India as well as translator of The Complete Kama-Sutra) concisely ranges over seven millennia of Indian history, from the Proto-Australoids to Indian independence. His narrative of the Pre-Aryan world’s embrace of the Indus civilization possesses great interest, and his coverage of the Jains, the Buddhists, and the great Sanskrit classics catches the essential of each subject. However, as the great epochs pass, Daniélou unfairly denies that Islam, the Mughals, and the British made contributions of any value to Indian civilization. Thus, a work that begins with the charm and intellectual verve closes on a bitter, discordant note. Nevertheless, given its breadth, this work is recommended for all libraries.
Library journal, February 1, 2003, Vol.128 N°2

I was rather interested by the Library Journal critic concerning “A Brief History of India”(128 N° 2, February, 1).
With regard to the point of view expressed about Moghul and British colonisation, I feel that the critic has an unconscious Western bias, which is one of the main sores in India even today.
Of course, both these invaders also brought something positive with them, but we must remember that prior to their arrival India was one of the richest countries in the world and after their departure one of the poorest.

When you see the destruction made by the Muslims and in particularly by the Moghul Emperor Aurangzeb in Benares, you understand some of the material effects of these invaders, but their permanent attack on the Hindus¹ social and religious system was even worse.
In any case, I deem Daniélou’s point of view is much more realistic that that of the French writer Guy Deleury who wrote recently in his book: L’Inde continent rebelle – Le Seuil Editions, 2000.

Page 257/258: The Indian sub-continent can look back with neither regret nor shame on its short century of British domination, to which it owes its telegraph, its railways, its neo-gothic railway stations, the gaudy uniforms of its sepoy corps d’élite, its metropolitan ports, masonic lodges and even the supreme paradox – the Congress Party, which led it to independence.

But it also owes it its current division, its delay in feeding the populations that the lowering of infant mortality has proliferated in its shanty-towns. Famine everywhere depopulated the countryside, revolts broke out in many provinces, bringing pitiless repression. Although persons of standing may have profited from the liberalism granted in small doses by London’s capitalists, the people lost their voice, the languages that nourished them, and their poets.